Reaffirming our call to Mexico

June 22-28 Carrie and I had the privilege of leading a team from Franconia Baptist's three language congregations (English, Korean, and Spanish) to serve in Puebla Mexico. Along the way God strengthened our call to be missionaries to Mexico. 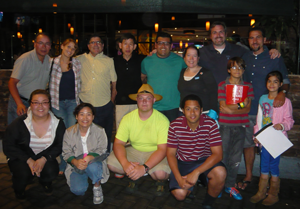 We hopped in some vehicles after a short commissioning service at the church and headed to Dulles airport. Due to mechanical difficulties, the youngest member of our team had to be rerouted through Mexico City. So some of us hoped a bus from Puebla to Mexico City to get him. We got back to Puebla at ~3:30 am. 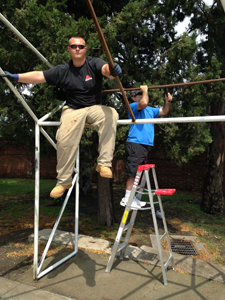 Thank you to everyone who helped fund raise the ministry expenses through the yardsale and the two FKBC car washes! We used God's resources for many different projects. The first thing we noticed was that the basketball/fútbol court (built by our 2011 mission team with 12 tons of concrete) is doing well! It gets almost daily use. To help out we repainted the goals, replaced the broken basketball hoops (stop hanging on the rims guys), and sanded down and repainted the metal benches surrounding the court. We were pleased to use some extra funds to repair more than a dozen broken windows around the campus and replace a broken microwave. 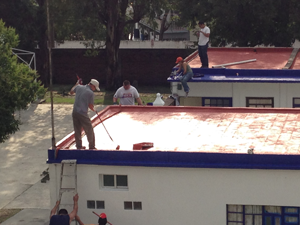 Some of our team members spent several days on the roof applying sealant and repairing some very weathered overhangs. Others scraped the academic building before rolling on 20 gallons of exterior paint. We were able to leave 85 gallons for the seminary to finish the other buildings.

One day we took a break from painting and watched the Mexico/Croatia game with a bunch of PBS students. That was a treat! We then had an exciting "15" minute trip to eat at a fellow believer's restaurant when spontaneous parades and celebrations clogged the streets since Mexico beat Croatia! ¡Viva México! 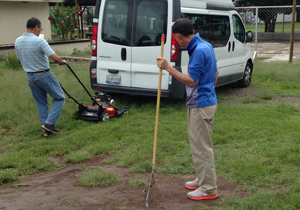 Spending time at Casa Alto Refugio: We traveled to the outskirts of Puebla to a Christian orphanage. Part of our team replaced their broken lawn mower and weed whacker to hack through the knee-high grass. The director herself was so appreciative of our assistance, hoping the nagging mosquito population would be reduced. The rest of the team dusted and washed the inside of the two story building.

We sat down to a meal of 22 pizzas and 11 orders of Crazy Bread. The orphanage is set up as 4 small houses that open to an indoor common area. Each mother oversees as many as 17 children in her home. We split ourselves among the kitchen tables for a meal full of laughter, despite some language barriers. During the leisurely afternoon, the children chose from several activities. Many boys played soccer with our guys or Uno in the common area. One girls' dining room was turned into a busy spa, complete with all-natural oatmeal face masks and cooling cucumbers to rest their eyes. The girls proved to be quiet artistic! All the Franconia ladies left with some funky colors or glittery designed nails. 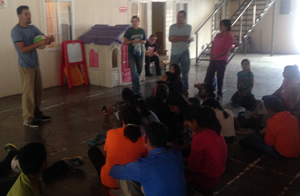 After some quiet time with books, coloring, and puzzles, everyone gathered together in the main hall. The soccer balls we brough were designed to illustrate the gospel with colorful patches. Kevin explained the Gospel using one of the soccer balls we had just been playing with. Jessica shared her testimony with the children, emphasizing faith instead of good works for Salvation. Aaron explained the road to salvation and invited the children to accept Christ.

We spent our last day learning more about the religious and cultural history of Mexico. Expanding on what we learned on a visit to the Inca Pyramids earlier in the week, we saw first hand how few people in Mexico really understand the Gospel of Jesus Christ. The picture of this woman pleading is a modern day collection of indulgences to buy a loved one out of the flames of purgatory.

One little girl told us that Jesus was dead because she saw Him in His coffin.  The churches are ornate sometimes to the point of being gaudy.  The people's devotion is misplaced.  It breaks my heart to see people place their faith in prayer candles and indulgences and sometimes even false gods carved right into the church walls right next to the Trinity. 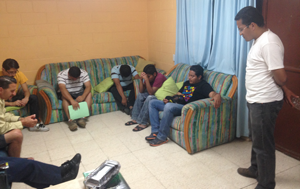 During our stay, our Spanish-speaking teammates were able to spend some quality time talking with the PBS students.  They often stayed up until well past midnight to talk theology and ministry. We were all very impressed with the potential they have to impact the lostness of Mexico for the glory of God.
Posted by Aaron and Carrie Kraft at 12:47 PM